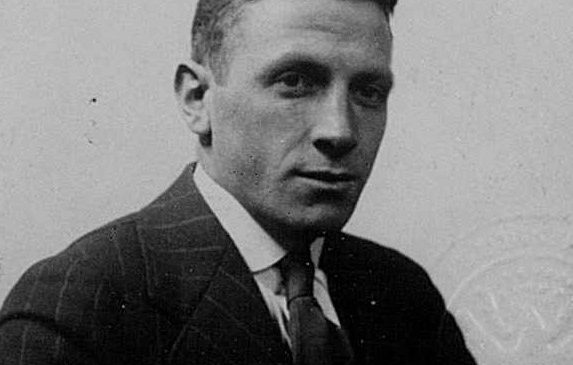 By Brian Slawski One of the pleasures of studying Burke’s history is discovering how many notable and interesting individuals have lived in our ostensibly small and sleepy stretch of Fairfax County.  Any list of these individuals would surely include Walter Macomber.

Walter Mayo Macomber was born February 25, 1894, in Revere, Massachussetts, just outside Boston.  While he was still a boy, his family moved to nearby Waltham, “The Watch City,” and by the age of 16 he was working as an “errand boy” in the city’s major employer, the American Waltham Watch Company.  Soon, however, he would find his way to much bigger things.

Walter Macomber found his lifelong passion in architecture, and in particular, restoration of Colonial-period architecture.  While his surviving writings don’t reflect on the germ of this interest, we might imagine how young Walter came to his calling, growing up beside a Colonial metropolis and as the son of a house carpenter.  From 1912 to 1914 he apprenticed with the Boston Architectural Club, and by the age of 20, he was listed as an architectural draftsman in the Waltham city directory.

He interrupted this career path only briefly, by volunteering for service in the American Unit of the French Ambulance Corps in 1916.  Though he hadn’t attended college, his YMCA World War I service card noted that he spoke French.  He was decorated for his service to France and returned home to pursue his vocation.

City directories indicate that he resumed working in architecture and moved to Boston between 1923 and 1924.  In 1928, Macomber became an associate member of the historically oriented architectural firm Perry, Shaw & Hepburn.  Here, he landed what must have been an assignment surpassing his wildest dreams.

In southeastern Virginia, the Rev. Dr. W. A. R. Goodwin had launched a campaign to preserve the immense historic heritage of his adopted town, Williamsburg, and by this time he had secured the financial backing of Standard Oil heir John D. Rockefeller Jr.  Perry, Shaw & Hepburn was commissioned to perform the master planning and restoration of Colonial Williamsburg, and Walter Macomber was selected to oversee the project.

For six very busy years, Macomber supervised the restoration or reconstruction of nearly all of the major public buildings in Colonial Williamsburg, including the Capitol and the Governor’s Palace.  The work also included rebuilding historic houses, shops, taverns, and gardens, as well as designing new housing for residents displaced from the historic district by the project.  By 1934, Perry, Shaw & Hepburn had completed the bulk of the restoration, and Walter Macomber was recognized as an expert in his field.

Macomber’s next project, arguably no less ambitious, took him from the Colonial capital to the nation’s capital.  Mr. and Mrs. George M. Morris had found their dream D.C. home—in Danvers, Massachussetts.  There, Robert “King” Hooper had built his stately home “The Lindens” in 1754, and it was the Morrises’ will that the house be dismantled, shipped by boxcar, and rebuilt for them in Kalorama.  From 1935 to 1937, Walter Macomber made it happen.

Moving to Washington himself, Macomber soon found that his reputation and the abundance of historic properties in the area gave him plenty of work.  In 1942, he undertook a significant project in Fairfax County, when Michael and Belinda Straight hired both Macomber and renowned landscape architect Beatrix Farrand to remodel Green Spring, their 18th-century house and estate.  Today, their work is open to the public as Green Spring Gardens.

By 1946, Walter Macomber had moved to Burke, where he had worked on renovations and additions to the Kincheloe family home, Greenfield.  Here, he purchased the 18th-century house known as Marimac or Mulberry Hill, which he remodeled while continuing to work on additional properties across Fairfax County and beyond.

Then in 1950 came another opportunity of a lifetime.  George Washington’s Mount Vernon asked Macomber to join them as a consultant, beginning an association that would last for 30 years.  His work there included excavation and reconstruction of the greenhouse–slave quarters; excavations of the blacksmith shop; and reconstructions of walls, necessaries, the salt house, and details such as the wooden finial supporting the weathervane.

Also in 1950, Macomber was appointed by the U.S. Commission of Fine Arts as a volunteer member of the Old Georgetown Board, a panel charged with preserving the historic character of Georgetown in accordance with Congressional statute.  His relations in this role were not quite so amicable as at Mount Vernon; ultimately, he and the rest of the panel would resign in protest at what they considered the D.C. Council’s excessive friendliness to development at the expense of preservation.  From 1964 to 1966, this story would repeat itself while Macomber served on another architectural panel for the city of Alexandria.

A full account of all of Walter Macomber’s work would be beyond the scope of a blog article.  As only a partial list, he was involved in restorations of the Fairfax County Historic Courthouse and the Powell–Krasnow House in Fairfax; Oak Hill in Annandale; Dranesville Tavern; Colvin Run Mill; the Ball–Sellers House in Arlington; Gadsby’s Tavern, the Ramsay House, and the Old Presbyterian Meeting House in Alexandria; the Noland Ferry House in Waterford, Loudoun County; Ford’s Theater and the City Tavern in the District of Columbia; and, farther afield, Stratford Hall in Westmoreland County, Scotchtown in Hanover County, and Locust Grove outside Louisville, Kentucky.  His last major project was the restoration of diplomatic reception rooms at the U.S. Department of State, completed when he was 90 years old.

In Burke, Walter Macomber and his wife Marian Hunter Macomber were active citizens.  They did some farming on a modest scale and were sponsors of the Burke Volunteer Fire Department in its fundraising.  Walter was a member of the Hunt Club, enjoyed fishing, and spoke to and wrote for the Historical Society of Fairfax County, in addition to speaking widely at conferences on architecture and preservation.  In 1965 he was one of founding members of Fairfax County’s Historical Landmarks Preservation Commission, now the Fairfax County History Commission.  Marian served as President of the Visiting Nurse Service of Fairfax County, as a director of the Lay Health Association, and on the local leadership of the American Cancer Society, Animal Welfare League, and American Red Cross.

Walter and Marian Macomber finally retired to Sarasota, Florida, where Walter died in 1987, leaving an enormous architectural legacy.  As one final note, Walter Macomber was not the only historical resident of Burke with a record of great service to Mount Vernon.  But that’s a story for another day.