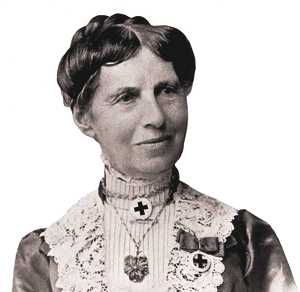 In Baltimore, Maryland on April 19, 1861, Union soldiers of the 6th Massachusetts Infantry, who were traveling to defend Washington DC, were badly injured by Confederate sympathizers. Learning that the men were being cared for in the US Senate Chambers, Clara Barton, who grew up in Massachusetts. used her own supplies to minister to her “Massachusetts boys.” Barton’s requests to friends and relatives for additional supplies were quickly answered.

After the first Battle of Bull Run on July 21, 1861, wounded Union soldiers were brought to DC. When hospitals quickly filled, some recovered in the Exhibition Hall of the US Patent Office where Clara Barton worked. After work, she fed the men, wrote letters for them, and helped them pass the time as they healed.

In 1862 US Surgeon General Hammond granted Barton a pass to travel with army ambulances to comfort and nurse the sick and wounded. On August 13, 1862, Clara Barton wrote “When our armies battled at Cedar Mountain, I broke the shackles and went to the field. I may be compelled to face danger, but never fear it, and while our soldiers can stand and fight, I can stand and feed and nurse them.”

Clara Barton arrived at the battlefield with a wagon load of supplies pulled by a four mule team. The surgeon on duty wrote about Clara Barton “I thought that night if heaven ever sent out an angel, she must be one – her assistance was so timely.”

At the Second Battle of Manassas, August 28-30, 1862, Confederate Generals Robert. E. Lee and Stonewall Jackson beat Union General Pope’s army, which retreated to Washington, DC. Each side lost thousands of men, wounded and dying. Union casualties were brought by wagons and carts to Fairfax Railroad Station to await railway transport to hospitals. The Federal Government asked for volunteers to proceed to the battlefield to aid the wounded and bury the dead. Hundreds, including Clara Barton, responded. Each volunteer received two days of food rations, a bucket, a tin cup, and a bottle of brandy. Many volunteers were stopped by Union pickets and turned around before reaching the station. Others retreated to DC upon hearing about the possibility of another Confederate attack. Some volunteers got lost and never reached Fairfax Station. Clara Barton and delegates of the US Sanitary and Christian Commission arrived successfully by train.

On September 4, 1862, Clara Barton wrote of her experience: “I cannot tell you the scenes that awaited our eyes – the wounded were constantly coming in, but no hospitals this time, only God’s great one under the canopy. The men were brought down from the field and laid on the ground beside the train and so back up the hill till they covered acres.”

Clara Barton worked tirelessly for three days and nights, ministering to the wounded and dying. Union Surgeon Dr. James Dunn described Clara Barton,” She was again a welcome visitor to both the wounded and the surgeons.” She wrote that they filled three trains with 1250, 1100, and 940 wounded soldiers.  Once she was assured that every wounded man had been placed on a train, she left Fairfax Station just as the rear guard action of the Battle of Chantilly (Ox Hill) began. She said that she would risk being captured 40 times over before she would leave one wounded man behind. It is presumed that during those three days many soldiers died. No records have been found as to where they were buried. It is possible that they were loaded onto the trains with the wounded.

Clara Barton was not satisfied to remain in the rear of the battle. She outfitted ambulances and prepared to go to the front. At Antietam on September 17, 1862, she ordered her ambulance drivers to follow the cannon fire and traveled all night in order to be at the field to help the wounded. She traveled eight miles behind the Union lines to be with Fighting Joe Hooker in the area of the heaviest fighting. Barton brought candles which enabled the surgeons to work all night. When supplies ran out, she got sheets from nearby homes to use as bandages. She made gruel for the wounded using commandeered food.

She was not worried about her own safety at Antietam. When she leaned over a wounded man, a bullet tore through her sleeve and felled the soldier. She wrote of the experience, “A ball had passed between my body and the right arm which supported him, cutting through the sleeve and passing through his chest from shoulder to shoulder. There was no more to be done for him and I left him to his rest. I have never mended that hole in my sleeve.”

Throughout the rest of the Civil War, Clara Barton ministered to the Union soldiers until she returned to DC to nurse her brother Stephen. In February of 1865, she learned from a friend that the government needed help in contacting the relatives of captive or missing Union soldiers.

To his Excellency Abraham Lincoln President of the United States

Sir, I most respectfully solicit your authority and endorsement to allow me to act temporarily as general correspondent at Annapolis Maryland, having in view the reception and answering of letters from the friends of our prisoners now being exchanged.

It will be my object also to obtain and furnish all possible information in regard to those that have died during their confinement.

Working first in Annapolis and then in DC at the Missing Soldiers Office on 7th Street, Clara Barton worked tirelessly to compile the Rolls of Missing Men.

In conjunction with this project during the summer of 1865, she worked with a survivor of Andersonville prison, Dorence Atwater, to identify the graves of 13,000 Union soldiers buried in the Andersonville cemetery prison camp in Georgia.

When traveling in Europe in 1869, Clara Barton was introduced to the International Red Cross, which resulted in her lobbying our government to endorse the Geneva Conventions and establish the Red Cross in the United States. President Chester A. Arthur endorsed the conventions and the Senate ratified his action in 1882. Clara Barton led the American Red Cross until 1904.

In 1961, an historical marker at the corner of Route 123 and Fairfax Station Road near the church cemetery was dedicated.

Here at Fairfax Station in early Sept. 1862, after the Second Battle of Manassas and the action near Chantilly, Clara Barton ministered to the suffering. By her humane and tireless efforts this Angel of the Battlefield helped move over 3000 wounded to safety.