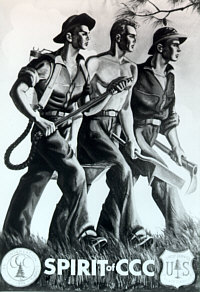 In 1933 the United States elected President Franklin D. Roosevelt, who promised to ease the pains of the Great Depression. In 1929, the nation had suffered the worst stock market crash in its history. By 1933, the unemployment rate had increased to thirty-three percent. Many businesses and banks had closed and thousands of Americans were homeless. Food riots broke out in several cities.

Within the first week of President Roosevelt’s administration, he challenged his staff to find a way to put 500,000 single, young men to work in a nationwide conservation project. On March 31, 1933, Congress passed legislation establishing the Civilian Conservation Corps (CCC). The CCC program involved the coordination and cooperation of four departments: War, Agriculture, Interior, and Labor.   The first enrollees came from 17 eastern cities and were often sent far from home. These city boys had to quickly adjust to outdoor life. This “volunteer army” was subject to military physicals, routine and discipline. Each man was paid $30 a month, of which $25 was sent home to his parents. Many of the camps were tent cities, until the CCC took on a more permanent status and barracks for 40 men each were built. Regular military or reserve officers from all branches were in command. In the camps, the supervision was shared by the Army’s camp commander (camp superintendent) and the park superintendent. Assisting the regular or reserve commanding officer was a supply sergeant, mess sergeant and cook.

The Department of Labor selected the young men who wanted to enroll in the CCC. The War Department was responsible for physicals, transportation, food, clothing and shelter. During the early months of the CCC, the men ate C rations. Many of the CCC men were underweight when they enrolled, and the 8 hour days of hard physical labor took its toll on them. A nickname for the CCC emerged, “Colossal College of Calluses.” Camp commanders quickly abandoned the C rations and started buying provisions from local farmers to improve the diets of the CCC men.

The CCC camps projected a military image; the CCC men wore surplus military uniforms and rode military transport to work sites. However, there was no drilling, saluting, or weapons training. Typically, the enrollees were men between the ages of 18 and 25, who had one year of high school education. They would enroll for six months, with the possibility of three renewals. After hours, the men could take literacy classes and or learn life skills like woodworking. On Sunday religious services were provided.

At first, the CCC camps faced opposition from nearby communities. Residents feared these “bums” taken from welfare rolls would become thieves or poachers. African American CCC enrollees were segregated and relegated to military bases or parkland where they would not have any contact with the locals. Opposition to the CCC camps decreased as communities benefited from the stimulation of the economy and the CCC work projects.

Eventually, there would be 184 camps in Virginia; categorized as Private Forest, National Forest, State Parks, and Soil Conservation.  By 194l, 11 additional Virginia state parks were created by the CCC. In the Shenandoah National Park, there were 11 CCC camps that planted over 100,000 trees and shrubs, constructed trails, and built Skyline Drive. In the Colonial National Historical Park, near Williamsburg, African American CCC men worked on archaeological digs and preservation at the Yorktown Battlefield.  Elsewhere in the state, a summer camp for underprivileged children was built at Prince William National Forest; a visitor center was built in Fredericksburg; and Civil War trenches were reconstructed.

Fairfax County had two CCC camps located at Fort Belvoir and Fort Hunt. Fort Hunt’s CCC camp, NP 6 VA, began in October 1933. These men worked on establishing Fort Hunt as a park and recreational area, landscaping the George Washington Memorial Parkway, building sea walls, and creating a bird sanctuary, Roaches Run. Also, a museum laboratory was established at the camp where 20 enrollees, under the supervision of museum specialists, created museum displays and dioramas for eastern parks. The Fort Hunt CCC camp was considered a “model” camp; as a result, the King and Queen of England visited it in June 1939.  By February 1941, the Fort Hunt CCC camp’s classification had been changed to defense, which meant the camp projects became more military in nature, including defense of the capital in case of war.

Fort Belvoir’s first enrollees arrived in April 1933, received “conditioning,” and were moved to a CCC camp in Maryland in May. In May 1933, nearly 1,000 World War I Army veterans arrived to complete reforestation projects. In June 1933, nearly 200 of these men engaged in a drunken brawl in the small community of Accotink, outside Fort Belvoir.  The military police were called in to corral the men back to base and restore order to the communities of Accotink and Pohick. Within a week, the men of this reforestation camp were sent to Vermont to work on flood control.  Three months later the Post reported, “A small unit of 78 Negro youths in the civilian conservation corps is quartered in an isolated section of the Army post awaiting more recruits.”

In September 1935, the CCC camp, Army 3VA- 2399 C for “coloreds” was officially established at Fort Belvoir. African Americans had not been actively sought to join the CCC. Army bases and parks were considered ideal locations for the camps for “coloreds” because they were isolated from the local communities. These African American CCC men were supervised by white Army officers.

On September 1, 1934, The Washington Post reported that Senator Bristow of Annandale had “suggested a CCC camp in that section of Fairfax County (Lee District, along Accotink Creek) for building roads through the dense woods as an aid in forest fire fighting.”  The Fort Belvoir CCC men completed afire trailstartingat Old Keene Mill Road (near present day Irving Middle School) and crossingAccotink Creek through what is today Lake Accotink Park. This fire trail enabled fire equipment to cross through a heavily forested area and also provided a short cut for the residents. One resident, Bill Sheads, described the CCC road: “As a youngster, the CCC road became a big part of my life. I traveled it many times with my dad, while going to his several sawmill locations.  The new CCC road gave excellent accessibility to the central part of this large scope of forestland.  It also provided access for recreation such as hunting, fishing, hiking, observing wildlife, and other activities.” Today, there is a historical marker near the Lake Accotink Park visitor center, which marks where the trail crossed through the park.   The African American CCC men of Army 3 VA – 2399 C and all the men enrolled nationwide in the CCC provided an invaluable service to the nation.  Their pay sustained many families during the Great Depression, and their work restored, conserved, and protected our natural and historical resources. The CCC program ended with the onset of World War II; many of the CCC men enlisted and were able to use the skills learned in the CCC during their service. The unofficial motto of the CCC “We Can Take It” was proved repeatedly by the efforts of the CCC men, and their legacy lives on today.

5,000 residents from Alaska, Hawaii and territories

Average Number of Camps Operating in the US each year: 1,643

Two hundred men in each camp

Total Number of Camps: 4,500 in US. and territories

Number of Trees Planted: over 2 billion

Number of People who directly benefited from enrollee’s pay checks:  12 to 15 million

Sources:  The Tree Army: A Pictorial History of the Civilian Conservation Corps, 1933-1942 by Stan Cohen

Into the Woods: The First Year of the Civilian Conservation Corps by Joseph Speakman

For Further Information read The CCC Road by Bill Sheads at