Remembrances of our Fairfax County Veterans 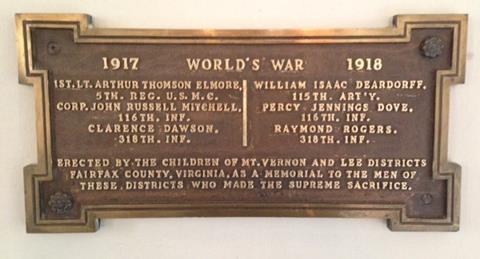 For almost two years the Fairfax Herald newspaper regularly published lists of the names of the Fairfax County men who were in service. During the war, 30 county men were recorded as dying while in service. There were four officers and 18 privates and their average age was 22. Eleven were killed in action or died as a result of their wounds. The rest died of disease, illness or an accident. All over the world, remembrances evolved to honor those who had died during World War I.

A Poem and the Poppy

Lieutenant Colonel John McCrae was a Canadian physician and soldier during World War I.

In a letter home, he wrote:

The general impression in my mind is of a nightmare. We have been in the most bitter of fights.    For seventeen days and seventeen nights none of us have had our clothes off, nor our boots    even, except occasionally. In all that time while I was awake, gunfire and rifle fire never ceased for sixty seconds ….. And behind it all was the constant background of the sights of the dead, the wounded, the maimed, and a terrible anxiety lest the line should give way.

The day before he wrote his famous poem In Flanders Fields, one of McCrae’s closest friends was killed in the fighting and buried in a makeshift grave with a simple wooden cross. Wild poppies were already beginning to bloom between the crosses marking the many graves. Unable to help his friend, John McCrae expressed his feelings through his poem which was written in May 1915.  Later, McCrae died of pneumonia in January 1918.

In Flanders fields the poppies blow

Between the crosses, row on row,

That mark our place; and in the sky

Scarce heard amid the guns below.

We are the Dead. Short days ago

Loved and were loved, and now we lie,

Take up our quarrel with the foe:

To you from failing hands we throw

The torch; be yours to hold it high.

If ye break faith with us who die

We shall not sleep, though poppies grow

Moina Michael was a professor at the University of Georgia when the US. entered World War I in April 1917. She took a leave of absence and volunteered to assist in the New York-based training headquarters for overseas YWCA workers. Inspired by McCrae’s poem, she vowed to always wear a red poppy as a symbol of remembrance for those who served in the war. After the war ended, she returned to Athens, Georgia and began making and selling red silk poppies to raise money to support returning veterans. Later, veteran organizations followed her example.

At the eleventh hour of the eleventh day of the eleventh month of 1918 [November 11, 1918], the opposing sides of the World War agreed to cease all fighting. The war ended with over 18 million dead and 23 million wounded worldwide. The treaty that officially ended the war was signed on June 28, 1919. As many Americans recognized November as the true ending of the war, President Wilson declared November 11, 1919 as the first Armistice Day.

Wilson declared “To us in America, the reflections of Armistice Day will be filled with solemn pride in the heroism of those who died in the country’s service.” The original concept for the celebration was for the suspension of business for a two minute period beginning at 11 a.m., with the day also marked by parades and public meetings. Annually, county residents held celebrations in churches and schools, laid wreaths, made speeches and organized parades. On June 1, 1954, President Eisenhower signed legislation recognizing November 11 as the day to remember the veterans of all wars. The holiday was called Veterans Day from then on.

A bronze tablet was unveiled at the old Pohick Church on Sunday May 29 ,1921 to honor the six soldiers/church members who died in service during World War I.

President Warren G. Harding spoke at the dedication and unveiled the tablet, which had been paid for by school children, Sunday school class members, and patriotic organizations.

The Tomb of the Unknown Soldier

On Memorial Day, 1921, four unknown soldiers were exhumed from four World War I American cemeteries in France. US. Army Sgt. Edward F. Younger, who was wounded in combat, highly decorated for valor and received the Distinguished Service Medal, selected the Unknown Soldier of World War I from four identical caskets at the city hall in Chalons-sur-Marne, France, on October 24, 1921. Sgt. Younger selected the unknown by placing a spray of white roses on one of the caskets. The chosen unknown soldier was transported to the United States aboard the USS Olympia. Those remaining were interred in the Meuse Argonne Cemetery, France. The Unknown Soldier lay in state in the Capitol Rotunda upon his arrival in the United States until Armistice Day, 1921. On November 11, 1921, President Warren G. Harding officiated at the interment ceremonies at the amphitheater at Arlington National Cemetery.

Fairfax Courthouse War  Memorial
The Fairfax Daughters of the American Revolution chapter raised funds to honor WWI veterans with a memorial. On Saturday afternoon, June 26, 1926 at the Fairfax County Courthouse, the chapter dedicated a Vermont granite memorial with a bronze plaque and the names of the 30 county men who died in service. On the plaque, there are two lists of names arranged alphabetically. The lists reflect the segregated military units in the armed forces at that time. Over the years, three plaques honoring veterans of other wars have been added;  American Revolution, World War II/Korean War,  and Vietnam War.